​”Auschwitz, the meaning of pain,
The way that I want you to die.
Slow death, immense decay,
Showers that cleanse you of your life.
Forced in, Like cattle, You run, Stripped of, Your life’s worth”
Slayer (1986)

Most people tend to go to Krakow as it’s the simplest destination to get to Auschwitz and today I took a tour around the concentration camp.

There are two parts to the area known as Auschwitz. Auschwitz I, the prison camp that housed political prisoners, suspected members of the resistance and Poles. The second camp was Auschwitz- Birkenhau. This was the forced labour and extermination camp, and the site of the infamous railtracks that led 1.3 million people inside. There was another camp in the complex but that is no longer standing and thus unable to be viewed.
The tour started with a visit to the Auschwitz I camp. It’s mainly a museum now that houses displays of the personal belongings that were stripped from the victims before they were either sent to their death or into the prison.

The museum also had a lot of information on how the Nazi regime used propaganda to avoid any evidence of the atrocities that occurred there. The main use of advertising to the victims, was that after their long train journeys, some of up to 11 days, they were told they were going to get a shower. So they voluntarily stripped off and were given hangers and it made it feel as if everything was decent when in fact they were walking to their deaths.

The tour took us around the complex and into some of the buildings. There were photos of the prisoners being shipped into Auschwitz, the actual remains of their belongings and even a room of female hair as the Nazis would use it to make textile. There was also replicas of the living conditions they endured and the prison house that contained German criminals. The end of the tour showed the death wall, which is where people were shot in the back of the head and finally the crematorium. The crematorium was a large empty building that we could actually walk into and we go to see the ovens they used also. As we ventured outside, there was a large prayer circle of females all singing a song in remembrance. 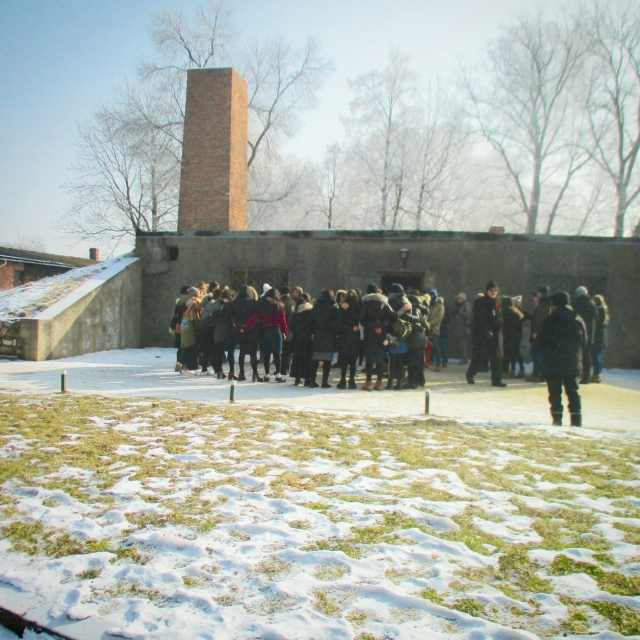 We next headed to Auschwitz- Birkenhau for the remainder of the tour.

See the next post “Evil Has No Boundaries” for information on that half of the tour.

One thought on “Angel Of Death”