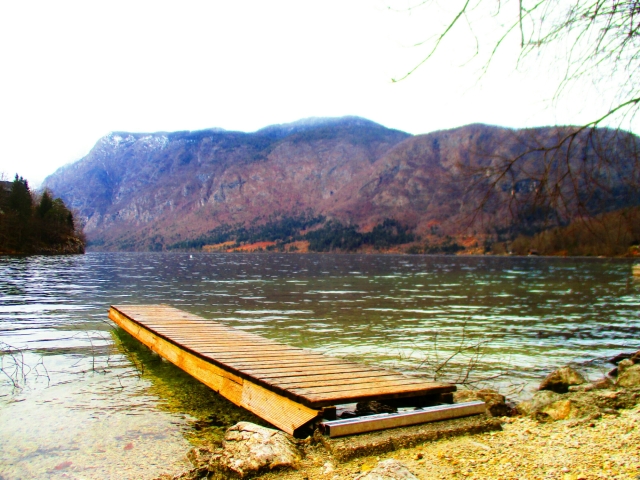 Part Two of my adventures in Slovenia.

If you’ve read the previous post; Caving in Spirals, you’ll know I still haven’t been to the great lakes of Slovenia. Today was the day though.

I got up pretty early, 8am, and left to catch the bus. I went with the two guys from the day before as we’d agreed we’ll all journey together. Lake Bohinj was our first destination. It’s further away from the capital, and the less touristic of the two. This was an awesome sight to behold, the lake sat at the bottom of the mountains and was just such a tranquil sight to behold. The weather wasn’t the greatest, it was quite misty and the clouds draped over the top of the hills but it all added to the effect. Having enjoyed the view from the bottom of the lake, we tried to find a way to see it from the top but found this difficult. The best spot to look at the view was actually from a house but this house was plastered with keep out signs and ‘Private Property’ everywhere. Clearly they get a lot of tourists.

We caught the next bus out of Bohinj as it was getting on in the day, and we next went to the more popular lake, Lake Bled. As soon as we arrived it was clear to see this was the tourist spot. The whole left bank was littered with hotel, after hotel, and restaurants aplenty. There weren’t as many people as expected, probably due to the less than perfect weather, but that just meant more space for us. We wandered around the lake before climbing up to the castle. This castle cost to get in so we didn’t go inside but still took advantage of the spectacular views from the top. In the middle of the lake is another castle and in the summer it’s possible to swim or sail out to that, but not in this season. Instead we got the next bus back to Ljubljana.

2 thoughts on “Between The Anchor and The Air”