I’ve seen some peculiar statues in my time; Man with Two Hats, The Little Mermaid, and Man At Work, to name but a few. But the strangest has got to be in Pristina, Kosovo.

Back in 1999 when the Republic of Kosovo was under attack from Serbian forces, NATO intervened and bombed Belgrade in an attempt to stop the war. Due to this action, the people of Kosovo are committed to the remembrance of the political leaders at that time; Tony Blair (UK) and Bill Clinton (US). That somewhat explains why there is a street dedicated to Mr Blair and another street for Ol’ Bill. The Clinton Street actually comes with a statue of the man himself, and that is the monument I was referring to earlier. 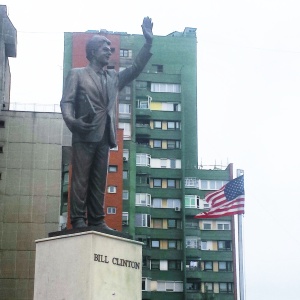 Just up the road from this statue is one of the most architecturally interesting buildings I’ve witnessed; The National Library. The National Library is a communistic wet dream, strange architectural blocks sticking out the side of the building and then peculiar metallic netting covering the façade. I didn’t go in as it looked closed but I did take a walk around it and faced an old abandoned church. It didn’t look as if there was any restoration work ongoing with this one, unlike every other religious building in the city. 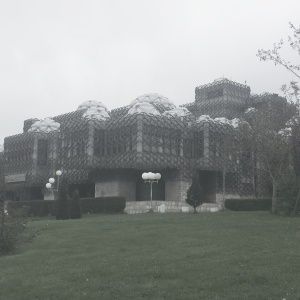 This city is almost the complete opposite to Prizren in that there are virtually no old buildings and everything still looks under construction from 17 years ago. After walking around for a good few hours, and facing almost torrential downpour, I thought I’d head back to the hostel for a little advice, namely where to get some good food. Turns out there was an amazing little Burek place just round the corner. I had intended to wait out the rain in the hostel and then head out sightseeing again but the rain was pretty inconsistent and I couldn’t work out when the next downpour was going to hit so instead I just stayed inside.

The next day I decided to explore a little more of the city, this time in the sun, but as it turns out I’d actually seen all the main sights, so instead I chilled at the hostel before heading to my next destination: Skopje, in the Republic of Macedonia.