After spending quite a while in Greece, I decided to make a move and continue my travels. From Thessaloniki, there is a direct bus to the capital of Bulgaria so I boarded that and headed onto Sofia.

The bus journey itself was relatively simple, I was expecting a lot of hassle getting into Bulgaria but they virtually waved us through. The Greek border checked our passports and the Bulgarian force just checked the luggage compartment to make sure we weren’t smuggling anyone and then we arrived into Sofia. I disembarked and walked to my hostel which took about 45 minutes so by the time I arrived at my destination I was shattered and just wanted to sleep. I almost passed out as soon as I hit the pillow.

On my first day in Sofia, I thought I’d participate in a walking tour of the city. The tour took the group all across the city telling us the history of the country from early Thracians, all the way through the Roman Empire, Byzantine occupation and even up to WWII. There were a lot of buildings that were very significant but, in all honesty, they didn’t really catch my attention. The bit that did grab my interest was the mineral baths and the taps outside. The taps had a constant supply of hot mineral water flowing through them and it is thought that this water has healing properties, so of course I had to try some, just in case. The water had a very sulphuric odour and had a mild taste of old egg, which isn’t the most pleasant flavour in the late afternoon. We then moved the tour on and passed the original St Sofia church which is where the city got its title and then ended the tour at the Alexander Nevsky Cathedral. As soon as the tour was over, I headed back to St Sofia’s and walked inside. The interior wasn’t as gaudy as some I’ve seen but still somewhat impressive. The basement however, this housed centuries of history. Different levels had different eras of architecture and the only negative point I have about that is that in order to get free entry I had to promise not to take any photographs. 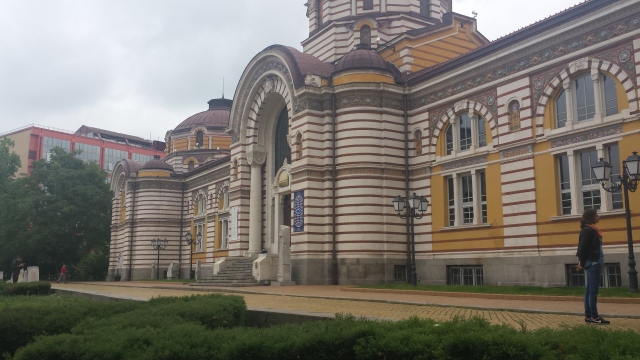 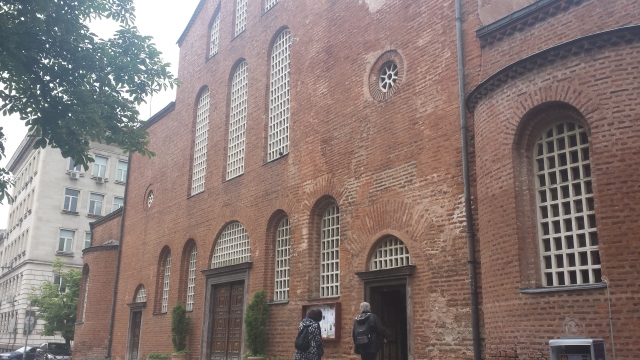 At the end of my walking tour, I was informed about other tours the company offered and one of them really attracted me; a Bulgarian food tour. It took quite a while to get everything arranged with the staff as too many people had turned up for them so they unfortunately had to turn some people away. I was one of the lucky ones though and I was able to wrangle myself a place. The tour took us around to certain food stops and we got try a selection of typical Bulgarian delights. The first we tried was called Tarator soup which is a cold soup made with yogurt and water, onion and garlic. It was a very peculiar dish to start with, but certainly a good introduction. The next was a flaky pastry called Banitsa which reminded me of Burek in a way but unfortunately not filled with meat, it was a soft cheese instead. On our final stop we tried some small crudité style food; Lutenitsa and Kyopoolu. These were tiny slices of bread with a tomato paste topping and raw garlic topping respectively.

Having eaten my way around town, I decided to head back the hostel for a little rest and got to hang out with some of my fellow residents. A group of us got together in the evening and decided to check out some bars. As none of us knew the city, we asked reception to recommend some places and so I took the group on one of my patented pub crawls. I had a little help from some of the other guys and some were not so helpful but overall it was a very good night out.

The next morning, I woke up a little worse for wear and headed downstairs for breakfast and to check the status of the day tour. I had signed up to join a tour to Rila Monastery but unfortunately due to lack of interest this was not happening. Instead I decided to have a bit of a lazy day and so I visited the open market and took a stroll around the city. Nothing really caught my eye and after a few hours I found myself back at the hostel.

That evening I joined a bar crawl but it was nowhere near as good as mine the previous night and ultimately I ended up ducking out early.
On my final morning in Sofia, I had to work out the best way to get to my next destination and so I caught a bus to Plovdiv. The two hour journey went quite well and I actually met a fellow Brit and we had a long conversation and as the bus arrived into the city we went our separate ways. I found my hostel and checked in.

In Sofia, I was staying at Hostel Mostel. It came highly recommended by other travellers I’d met previously and so I had high expectations. The loft room I booked was for about 20 people and the beds were single mattresses on the floor. At first glance it looked very unprofessional but it was actually a very nice place to relax. They also provided complimentary breakfast and the free dinner included a small glass of beer, an ideal way to start the night.