Plovdiv was a bit of a turning point for me, literally. I left Bulgaria’s second city and boarded a bus back to Thessaloniki. I felt that I had not experienced enough of the city and the Greek atmosphere.

7 hours sitting on a bus from Plovdiv, via Sofia, all the way back to Thessaloniki can take its toll. By the time I arrived, I was absolutely shattered, so it was good that my friend let me crash at theirs so I didn’t have to stay at a hostel. Over the course of about 3 weeks, I spent most of my time just relaxing, exploring the city and even getting some lessons in Greek language. Two things did stand out for me over this time though; a meeting with a couple of Mormon ladies and a free Punk rock gig in the street. The meeting with the couple was just by chance, I was sat by the port just watching the world go by and two cyclists pulled up beside me and told me I wasn’t local, not surprising considering I possess absolutely zero Greek characteristics. We sat for nearly two hours chatting about our hometowns; they were both British too, our backstories, and what we were doing in this magnificent city. at the end, they realised the time, gave me their business card and went on their way. The street gig was the complete opposite; beer and Bad Movies. The band were a local punk act, but a very popular act so it was good to see the crowd out in full.

After spending three weeks in Thessaloniki, I had to get a flight to Berlin and then an overnight bus to Prague. This was a very special weekend for me as it was the Bachelor party of a good friend of mine and I had promised him that I wold be available for this incredibly important event.  The weekend itself was great fun, I took my friends around Prague, we enjoyed a day out at a shooting range and I even got the chance to catch up with old friends that I used to work with at the hostel. I did have to leave eventually though so I boarded a bus to Berlin. The bus was supposed to leave Prague at 3.30am and arrive into Berlin airport at 7am. This would give me an hour to relax before the gate opened for my flight to Manchester. However, the bus didn’t arrive until 5am and then we spent 2 hours stuck in traffic so I didn’t get to the airport until my flight had already closed. Luckily, there was another available flight the same day so I was able to book onto that one instead,and I made my way back to Manchester in the UK.
Coming back to the UK was quite a culture shock, I was so used to spending my time in the Greek sun that I was surprised to be actually enjoying the dull, gloomy weather of York. I spent a week back at my family home but after a while, I started to become quite restless as I felt like I had reverted to my 18 year old self. I decided to come back to Thessaloniki and boarded the next flight out of the UK.

This time, I had no issues with flights and spent 12 days back in Greece’s second largest city. This time, I didn’t do anything particularly monumental, but my friend and I did head up to the Byzantine walls, as I have previously done, and enjoyed the dusk environment with a picnic. The rest of my time was spent playing backgammon, or as before, losing at backgammon.

At the end of July, I boarded another flight from Thessaloniki to Manchester. This time, I was heading back for two immensely important commitments; my younger sister’s graduation, and my friend’s wedding. I arrived into York on the Wednesday and on the Thursday, I proudly watched my little sister graduate from Leeds University and then on the Friday, my father and I drove down to Exeter. The Saturday was spent with close friends celebrating the bonding of two special people. The following day I decided to take a day for myself and wander around the city that I deem as my second home, the city that made me the (old) man I am today, I was able to navigate my way around the city and even spent some of the afternoon looking at classic cars with my old man.  The Monday was reserved to spend time with as many people as possible. My first stop was my old work office where I caught up on the new developments, new staff and old gossip. I then went out for lunch with the same colleague as I met in Plovdiv. This was followed by a walk into town and I randomly bumped in an old friend, busking in the streets. We had a good natter and then I popped into a local pub and restaurants and chatted with more old friends, it was here I that I tried a Jack Daniel’s Cider; weird flavour. After that I walked back to my old house and was luckily able to catch up with old housemates and then headed back to stay at my Dad’s flat for the final night. The Tuesday was spend with my father and we went to Exmouth beach for a good father/son day out, a beer (or alternative soft drink) was a nice was to finalise the day before I boarded my 7 hour long bus to Manchester airport. 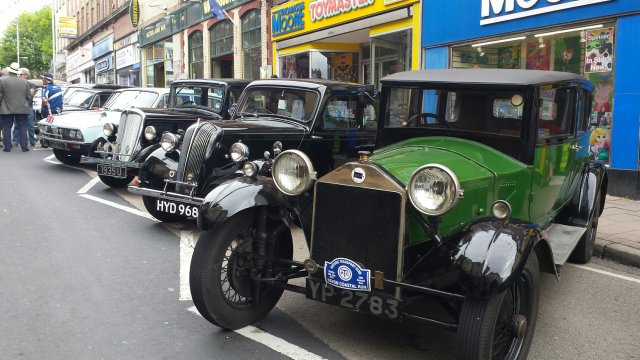 Due to my run of bad luck with airports, I arrived 5 hours before my flight was due to depart so there was a lot of waiting around before I could board. Eventually I did, and headed back to Thessaloniki for the 5th time.

One thought on “C’est La Vie”